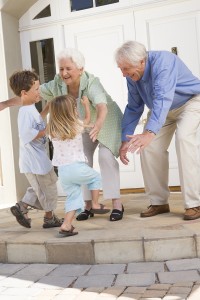 GRANDPARENTS – STILL IN THE PICTURE WHEN MARRIAGE ENDS?

One of the most rewarding relationships most people will ever experience is the one between a grandparent and a child. It is very special and no child should be deprived of the benefits that come from spending time with a loving grandparent. Nor should any child be deprived of learning how to take care of that grandparent as the child grows older and their beloved grandparents face old-age.

Do those children sometimes eat the wrong thing while visiting Grammy? Sure they do, but that sugar high will eventually go away. Do they get grimier than parents might like when they go fishing with grandpa? Of course they do but that worm “muck” really will wash off when they get home! The question we should ask is “do these children get something WAY more valuable than proper nutrition and clean hands when they spend time with their grandparents?”

Of course, every grandparent knows the answer to that question and so do most parents. It is a resounding “yes!”

But there are parents who might say otherwise. Even in the best of circumstances, disputes can arise between parents and grandparents. Those disputes are likely to escalate when parents divorce. Or they may develop for the first time if grandparents take sides against one of the parents or against a subsequent step-parent. New disputes frequently arise when one parent remarries after the death of a spouse.

Some of the circumstances that might cause a parent to decide that grandparent visitation is not in the child’s best interests are as follows:

THE DILEMMA – PRESUMPTION IN FAVOR OF “FIT” PARENTS

While there is a legislative remedy in Indiana if grandparents are being denied visitation with their grandchildren, the outcome in a court of law is rarely what the grandparents expected. Pursuant to Indiana Code 31-17-5-1, a child’s grandparent may seek visitation rights if 1) the child’s parent is deceased, 2) the marriage of the child’s parents has been dissolved in Indiana, or 3) the child was born out of wedlock (and paternity has been established).

However, the United States Supreme Court has ruled that the Fourteenth Amendment’s Due Process Clause protects the fundamental right of parents to make decisions concerning the care, custody and control of their children. Specifically, the Court stated that “so long as a parent adequately cares for his or her children (i.e., is fit), there will normally be no reason for the State to inject itself into the private realm of the family to further question the ability of that parent to make the best decisions concerning the rearing of that parent’s children.” Troxel v. Granville, 530 U.S. 57, 120 S.Ct., 2054, 2060, 147 L.Ed2d 49 (2000).

Unfortunately, the consequences of alleging that the parents are unfit are so great, and the burden of proof so high, many grandparents wisely choose not to sue their children for grandparent visitation rights. And those who DO frequently burn bridges that can’t be rebuilt.

There are things grandparents can do to avoid parent/grandparent conflicts and it is imperative that these things occur while the parent’s marriage is still intact. By understanding and acknowledging the proper role of a grandparent to a grandchild, most grandparents will maintain the relationship they want with their grandchildren in the event a marriage is dissolved by either death or divorce. Here are a few examples: