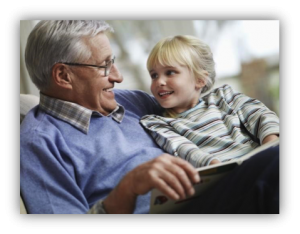 The outcome in a court of law is rarely what the grandparents expected. And if the child’s parents are still alive and married, grandparents have no standing whatsoever to seek visitation with their grandchildren.

Notwithstanding the Indiana Grandparent’s Rights set forth above, the United States Supreme Court has ruled that the Fourteenth Amendment’s Due Process Clause protects the fundamental right of parents to make decisions concerning the care, custody and control of their children. Specifically, the Court stated that “so long as a parent adequately cares for his or her children (i.e., is fit), there will normally be no reason for the State to inject itself into the private realm of the family to further question the ability of that parent to make the best decisions concerning the rearing of that parent’s children.” Troxel v. Granville, 530 U.S. 57, 120 S.Ct., 2054, 2060, 147 L.Ed2d 49 (2000).

In other words, grandparents will not be awarded additional visitation time with the child if the biological parent is “fit” and has decided it is in the child’s best interests to limit the amount of time the child spends with the grandparent.

Unfortunately, the consequences of alleging that the parent is unfit are so great, and the burden of proof so high, that many grandparents wisely choose not to sue for grandparent’s rights.   And those who DO, frequently burn bridges that can’t be rebuilt.

There are things grandparents can do to avoid conflicts with the child’s parents and it is imperative that these things occur while the parent’s marriage is still intact.   By understanding and acknowledging the proper role of a grandparent to a grandchild, most grandparents will maintain the relationship they want with their grandchildren in the event a marriage is dissolved by either death or divorce.   Here are a few suggestions:

Unfortunately, grandparents are at the mercy of the attorneys they interview and can be bilked out of many thousands of dollars simply because they didn’t ask the “best case” “worst case” question. Also – ask your attorney to explain what the United States Supreme Court had to say about grandparent visitation. If he or she doesn’t know the answer, find another attorney. Or hire the attorney for the sole purpose of researching this area of Indiana law and ask for a written recommendation before deciding how to proceed. And, oh yeah – be sure to ask what your attorney fees will be if the case isn’t settled out of court.

The Remedy – A Mediator’s Opinion

Additional information on this subject can be found in the blog.

View All
5 Advantages of Hiring a Pro-Se Divorce Mediator

The decision to divorce is already a difficult one for most individuals. Finding a skilled divorce mediator should not...